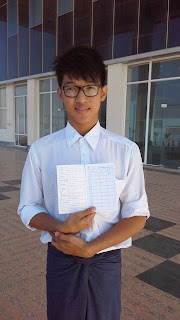 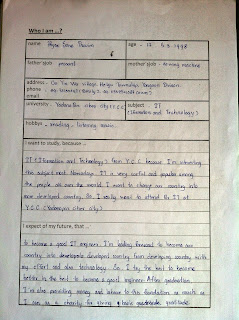 Dear KyiKyi, Are you going on fine everyday,Kyi Kyi.As for me,I am fine.Now I reached at Pwin Oo Lwim for attending Yadanapon cuber city University.So,I would like to tell you about my experiences and about my plan to study. I went to Pyin Oo Lwim with my mother and my aunt.We started to go at 6:30 pm and reached there at 5:00am.At this time,were difficult to fime the hostel.So we gana go for taking a rest to my uncle house.At the morning,we went to University for applying form.After that,we have introduction major and teachers explained about four majors.At  the first day,they learnt about ICT and Pre majors.On that day,I met with Thet Htwt San and her mother.On second day,they learnt Computer and Ame.All of the subjects are great and majority.So,I like all of the subjects.But,I gana choose only ICT major because I like this mojar most.We stop our introduction majors on Friday.So we are really attend on the next week.And I also  want to tell about my plan to study.I make my plan with six partation.That is 5:00 to 5:30am for making physical exercise,6:00 to 6:30 to eat,7:00 to 8:30 for study and after that is time to go.In the evening,6:00 to 6:30 for dinner and after that it's time to study.I really have to try as my plan.Dear KyiKyi,our 2014 students promised you to become excellent students.So I always promise you to become excellent student as my promise. I try my best to become better in the best.Thank you,Kyi Kyi for revorsind me as your students.Let me stop my report here.Because of why,now I am in the class.Teacher hasn't come yet.So I have the time to tell you about my plan and my experiences.Your loving student, Pyae Sone Thwim

Dear, Kyi Kyi, How r u? I hope you're going on fine everyday.As for me, I'm fine and I also take care of myself to prevent from diseases.It's the first time for using Email. I want to tell you about my experiences in an interview and the trip to some pagodas in Monn Ywa.At the first time,I would like to tell you about my feelings in the interview at Sagging. Before I go to Sagging for an interview, I tried very hard to speak English fluently and read some books to know about the many knowledge .when I reached to Sagging, I'm also full of anxiety.But I have the self confidence for an interview. I think every body should have the self confidence for facing with difficulties and we must try to become the best students of this Stiftung life foundation.And also this foundation had so many rule .There were about twenty students for an interview in Sagging. It was very difficult for us because it was a foundation to give not only supporting moneys but also training to have self confidence,good well and thinking.I was chosen from the Stiftung life foundation because of my trying.When u told me, you was chosen from this foundation, I really very happy and I couldn't tell how much I was happy.So, I was very lucky at this time.

After that, I want to tell you about the trip and travel experiences.In 19th, November,2014 we visited to Monn Ywa.We started the trip at 7:30 A.M to get there early.At this time, the weather was so cold at the outside and we wore the warm clothes. In that trip,I went together with my friends, senior brothers and sisters, Mr.Lennart , Mr.sasha, and you.We were happy together and also making th fun.And you told me , my friends and my seniors to speak English with Mr.Lennart and Mr.Sasha. So we can know about the people openly. Along the road, we saw the scenery of beauty and the farms the were grown many vegetables such as corn, sunflower, palm, watermelon and honeydew melon.On that day, the environment was so really nice.I think , we need to go to some villages for relaxation and to get knowledge. After that we took for about three hours because it was almost fifty miles far from Sagging. After taking for about three hours, we reached to Monn Ywa and then we went to Laykyun Setkya. There has ten thousands of banyan trees with the ten thousands of Buddha statues.And we continued to go inside the standing Buddha statue.There have twenty -seven stair and each has many pagodas and wall artstic pictures which showed about th hostries of our opinion.There have eight stair for the stage of hell,one for stage of human,six stage for heaven and twelve stage for others.Inside the first stair, there has a statue of saint who ware the ceremonial robe which were designed with ruby and diamond.And the Buddha statues inside the standing Pagoda have been built for many years ago.We were together finding and observin for about one hour And we went back from Laykyun Setkya and prepared for eating lunch.After that, we went to the monk village , it was very far away fromLaykyun Setkya and we took for about two hours.When we have gone to this village, the monk's family prepared so many delious food such as teaf leaf salad, ginger salad with fruits. The hospitality of villagers living in monk's village was really nice.We came back to Sagging at 6:45 P. M.We were very happy because of travelling.Along the road we were singing and making the fun.And we reached at 12:30 P. M. It was a really nice trip.It is because of you and we get the travel experiences.That's all for now.I am glad for telling about many experiences to you.Kyi Kyi, take care of yourself and also I wish you for having good health.Thank you, Kyi Kyi. Yours lovingly;